The idea for the Jammalong began its life so innocently.  Michael and I didn’t notice it at the time.  We were just having fun learning music at home.

The rudiment of the Jammalong began life naturally as Michael struggled to learn how to play his first banjo at the mature age of 37.   I hummed along to Michael’s banjo exercises and he turned to me and asked – “How do you get a tune out of all those notes?”

I stopped what I was doing and said – “You play and I will hum the tune I can hear in what you play.”  Michael would then go over the tune again and it made more sense to him when I hummed it.  The mixture of notes became a tune to him as I hummed and he recognized where to place the emphasis on the notes he played to make the tune easier to recognise.

Before long this happened every day and Michael’s progress on the banjo escalated.  He played the banjo exercises and I hummed the tune I could hear.  This is what Jammalong is – sharing the discovery of the music you are playing together with others as you go along. It helps you get a feel for the music even if you don’t know music theory.

In our early days of playing music I sometimes picked up my guitar to play along with him.  I hummed the tune so Michael could hear what his playing sounded like with someone else playing.  I got the benefit of hearing how I sounded with a banjo player so it was a win win for us both and we loved doing it.  It was a fun way to learn and took the boredom away from dry old music exercises.

We found this technique so successful it is how we learn new material to this day.   Our focus is on getting a sound that makes sense to us rather than on trying to play a perfect copy of what other people do.  We cannot be who we are not so we celebrate who we are and what we can do.

Over time we discovered this is not how other people we knew were learning how to play.  Many good players got stuck on using the tab formats available and felt frustrated when they couldn’t get it perfect.  Others tried to play every note exactly the way the record goes.  Sadly we have known many promising players who have given up because it was too hard to achieve.

Jammalong in Canberra is about doing what we do at home with others by playing music in a public place so anyone can join in.  This takes all the pressure off performers participating feeling a strong need to be perfect.  In a park setting flying footballs and chirping birds make a perfect performance impossible and players relax and do their best.  This is the true secret of musicial success in our opinion.

We are often asked us how long it takes to learn how to play the kind of old time country and bluegrass style music we play and we always ask them – “Can you play a G, C or a D Chord?”  If they say yes we tell them you play this kind of music now even if you only know one of those chords.  All you do is wait till that chord is played in the tune and strum along to the beat till the chord comes round next time in the tune.  It’s that simple.

The real key to creating a pleasant overall sound is keeping the beat and adding to the sound rather than clashing with it.  Doing this is the hard part of plying music.  Playing music with other people really brings this need to keep the beat into focus so practicing with other people helps us develop this skill.

The songs we like are community music best played at home with family and friends to get the real value out of them.  A few tunes at night after work can lift your spirit and swell your heart like few things can.  Jamming with others makes the effect even greater so why not do it regularly.

Once we recognized other people gave up playing music because they got stuck on music theory or music tablature we felt so sad.  It was then we really started to try and do something to stop this happening to people we know and love.

We love playing music and enjoy the journey of discovering new sounds.  We started to share our joy with others in a simple way at bluegrass and country music gatherings we attended. Old songs become new this way every time we play them and we will play music with anyone who wants to play music with us. 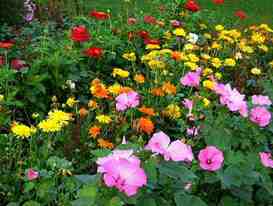 Playing with a new person or friends is just like sharing a musical feast.  Any note can happen and that’s the fun of it.  To develop musically we need to play with other people regularly and once a year at music festivals in jamm sessions is not enough for us.

Jammalong in Canberra developed from the notion that other people might find it just as hard to find other people to play music with as we did.  We needed an affordable public space where musicians could meet regularly.  Local parks in Canberra with their user friendly facilities are the obvious venues.

The goal of Jammalong is to enable all levels of musician’s to play together.  We have discovered that no matter what your level you can always learn something new. 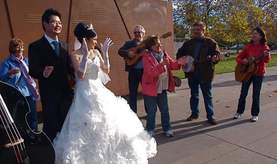 The key element of the Jammalong is playing with other people.  Learning by hearing and doing at the same time.  The group and sound dynamics keep you moving over the rough patches of your skills so you can feel what doing it is like even if you can’t do it very well yourself.

Since the Jammalong started we have discovered other benefits we had not anticipated.  The spontaneous participation of members of the public passing by has been the best as it a created a real sense of being part of a community we enjoy.  Children cannot contain their curiosity as the music draws their attention and they often dance without being prompted.

We have seen grandparents dancing with their grandchildren, we have had teenage skate boarders put down their skateboards to join us and we have serenaded a passing bride and groom.  They were so delighted they danced for joy.

Knowing how to play “Happy Birthday To You” has become mandatory for Jammalongers as we are often asked to play for the guest of honor at birthday parties being held in the park where we currently meet.

The Jammalong is now in its third year and there seems to be one or two new people each time we meet.  We are excited by what it may develop into.

In our minds eye we can envision a time when public parks all over Australia will have Jammalong Sessions happening regularly.  That way we will be able to travel and be sure to find other people we can play with.

Now that sounds like musical heaven here on earth to us.  We definitely want to be part of that and through the Jammalong we have found others who have the same desire.  What a special musical community this is – and its open to all who want to join in and be part of it.

To all prospective “Jammalongers”, we look forward to meeting and picking a tune or two with you sometime.
Michael and Dianne Porter
June 2011